The Redshirt Who Survives. 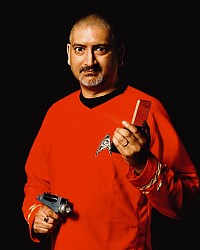 I’m the Redshirt that refuses to die.

In 2013 I was diagnosed with Primary Progressive Multiple Sclerosis. Now I try to lead as much of a normal life as l can.

MS hasn’t stopped me, in fact it has encouraged me to pursue my passions. I’ve always wanted to experience Comic Con, but work got in the way.

Now, I won’t let MS get in the way of my enjoyment, no matter what.

I was pretty active before my diagnosis, I enjoyed playing squash. In fact it was whilst playing squash I felt something was wrong. I was losing balance, missing easy shots, crashing into the side walls. I thought it was my eyesight, I had ‘double vision’ for some years, but unknown to me it also happens to be a symptom of multiple sclerosis.

Every year my double vision was getting worse and prisms in my spectacles were increasing. My right leg and arm were starting to react much more slowly and I found my right foot dragging, known as ‘foot drop’. I couldn’t understand what was going on, and my fear was I had a brain tumour. It wasn’t until I had a MRI scan, that lesions on my brain and spinal cord were seen, and I was diagnosed with Multiple Sclerosis. As my medical history showed no evidence of symptoms relapsing and remitting, the diagnosis of Primary Progressive Multiple Sclerosis was given.

Since then, things were progressing quickly. My walking started to suffer and my right arm and leg were getting weaker. I had to stop working and eventually I was using a wheelchair. As I lived an active lifestyle, I did not want to give up and wallow in self pity. I looked at what was happening not as a door closing, but a door opening. Before diagnosis I was working long hours, so I looked at it as life telling me to slow down and enjoy the things around me. There are passions in my life that I was not able to follow because of work, Comic Cons being one of them. Now I have no excuse to follow my dreams that I was missing.

Don’t get me wrong, things are a struggle, but it isn’t the end of my life, rather it is just the beginning of a new one.

Stand By For Action!

Disability Doesn’t Stop You Going To A Live Show - Stand By For Action! Sat 16th Apr

Having a disability shouldn’t stop you from enjoying an activity. I have never been to a live orchestra, so this was going to be an experience. At Birmingham Symphony Hall, I decided to get a seat in the stalls with my carer, as I am an ambulatory wheelchair user. But, if you’re not, there are spaces for wheelchair users, so you can listen to the music you love; whether it is a band or classical.

If you need to have a carer with you venues allow them to attend either free of charge, or reduced costs, check details when you book your ticket. There isn’t anything that should dissuade you; you can even get refreshments during intervals ordered beforehand and brought to you in the break.

So, go enjoy yourself and remember you have every right to enjoy a show as the next person. 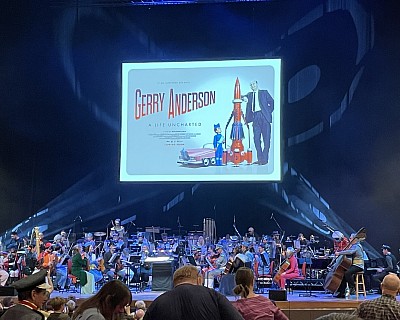